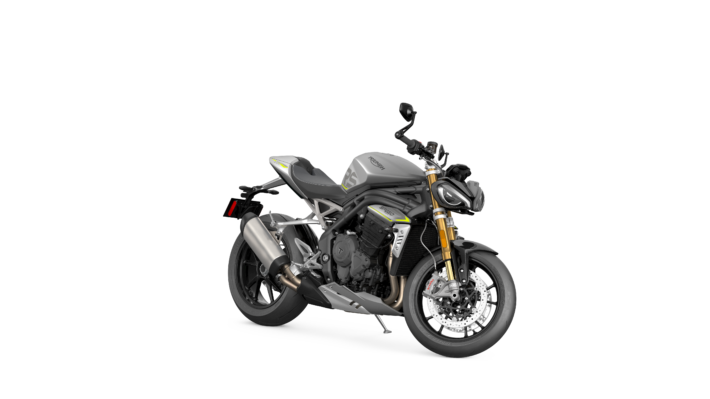 The Speed Triple is one of Hinckley Triumph’s longest running models – the first version appeared in 1994 – and it’s also one of the firm’s best. Back when it was launched, high-performance naked machines were almost unheard of, but as time went by, the rest of the market woke up to the appeal of a big, powerful engine in a supersports-level chassis, with upright handlebars and minimal bodywork.

The original 885cc triple has been updated regularly in the past twenty-seven years, and now we have a completely new version – the Speed Triple 1200, first launched in this top-end RS variant. At the heart of the matter is a completely new three-cylinder motor, with 1,160cc capacity (up from the 1,050cc of the current version), that puts out a meaty 178bhp, with 92ft lb of torque.

The firm’s also shaved a load of weight off the Speed Triple (the old one was a bit fat in the current market), cutting 10kg for a 198kg wet weight. The chassis all-new too, with more centralised mass, but sticks with the trademark single-sided swingarm first seen on the T509 in 1997.

The engine is now 7kg lighter, showing how much the old design was holding the Triple back. Triumph says every part has been redesigned, and it’s also more compact than the old motor, despite the increased capacity.

Bore and stroke are now 90×60.8mm, compression is 13.2:1 and it sticks with the DOHC four-valve head architecture. There’s ride-by-wire throttle control to work with the latest electronic rider aids of course, plus cruise control, and there’s a six-speed stacked gearbox with standard up/down quickshifter.

On the chassis front, the frame is a new lighter cast aluminium unit but keeps the tubular design cues that the Speed Triple has had since 1997. Suspension is by Öhlins, with fully adjustable 43mm NIX30 USD front forks and a fully adjustable TTX36 rear shock. No electronic semi-active option as yet – but we’d imagine that might appear in the future.

The Speed Triple has always had great brakes, and that continues here, with Brembo’s excellent Stylema calipers up front, biting on 320mm discs, plus a Brembo adjustable ratio radial master cylinder. Nice.

Rider aids is one area where the old Triple was a bit slow to pick up, but this new model has the lot, all controlled via a new five inch TFT LCD colour dashboard. There’s a six-axis IMU unit which assists the Continental cornering ABS system, plus lean-sensitive traction control and smart wheelie control. There are five customisable riding modes which includes a new enhanced ‘Track’ mode.

The equipment list is impressive too, with all-LED lighting, full keyless ignition (including the fuel cap), backlit switchgear, and a light lithium racing battery that saves 2.3kg over a lead unit.