The Arctic Rider, also known as Gordon Stuart, is back once again and this time he is going to take on the Dalton Highway. Find out more about why Gordon is undergoing this incredible challenge…

Gordon is known to never shy away from a challenge to raise vital funds for charity, but taking on one of the most dangerous highways in the world will be his biggest feat yet.

Watch the video below of Gordon announcing his latest motorbike challenge…

Everything you need to know about the Arctic Rider

It all began back in 2014 after Gordon’s daughter, Islay, was born 6 weeks prematurely. She was given the vital care she needed by the Tiny Lives team, and Gordon has gone above and beyond to make sure this charity can continue providing this lifesaving treatment.

Gordon’s first challenge gave him his alter ego name, The Arctic Rider. As you can suspect from the name, Gordon took on the Arctic Circle by motorcycle. This involved a 3 week trek covering 6,000 miles round the Arctic Circle and Nordkapp, which was to raise £5,000 for the charity Cerebra.

It was only last year that Gordon took on the Iron Butt Challenge, riding from Lands End to John O’Groats within 24 hours – it only took The Arctic Rider 18.5 hours to complete and raised over £1,600 for charity.

This is what Gordon had to say about what the Arctic Ride is really all about: “The Arctic Rider is all about a burning sense to do what it is right, adventure, community, and raising a shed-load of cash for charity!

“Being able to combine my passion for motorbikes with raising money is win-win for me. Every penny donated goes to my charities. Costs for my trip are funded by me or my corporate sponsors and I ensure that my adventures raise far more money than they cost.”

Why the Dalton Highway Challenge?

“After my Arctic Norway ride in 2014 and doing the UK Iron Butt in 2016, I really wanted to love up to my name as the Arctic Rider and head back to the top of the world and take on another Arctic challenge.

“After looking at globe, maps and logistics of all the rides I could attempt, Alaska seemed the most logical to go for next. I needed a ride that wasn’t going to have me away from home for months due to my young family but was also a big challenged and one that the public could relate to.

“With the Dalton Highway being made famous by ‘Ice Road Truckers’ and the fact I can fly to Alaska, do the ride, and be home within around 2 weeks, it was the perfect fit.”

What you need to know about the challenge 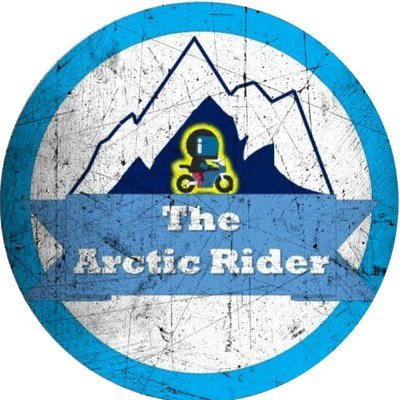 Although the Dalton Highway is only a 414 mile stretch (one of Gordon’s shorter rides!), it is mostly off-road riding. It’s regarded as one of the most dangerous roads in the world because of its remoteness, road quality and demanding weather conditions.

It all begins with Gordon making the 20 hour flight from the UK to Anchorage in Alaska, this is when he will pick up his motorcycle. Due to the large costs involved in transporting his own motorbike, Gordon has decided to hire one instead.

Once Gordon is back on two wheels, he will travel North through the Denali National Park to Fairbanks then onto the Elliot Highway. The 414 mile trip down the Dalton Highway will then begin.

Phil Freeman, a veteran of 10+ rides up the Dalton and Alaskan native describes the ride: “Every year motorcyclists are killed on the Dalton Highway. There are relatively no places to stop along the way: no gas, no convenient stores, no McDonalds. There are stretches of up to 245 miles without gas.

“On a good day, you can ride it wide open. On a bad day, you can go home in a helicopter. You are literally riding through pristine wilderness.  Welcome to the food chain.”

So how is The Arctic Rider preparing for his upcoming adventure? Gordon tells us all…

“The big thing about Alaska and the Dalton Highway in particular is that there is a lot of off-roading to do. So in February 2018 I’m heading up to Argyll in Scotland to spend a few days doing off-road training, Clive and the team at MotoScotland.

“Not only will I get a great course on off-road skills including riding position, braking, hills climbs, how to pick up a dropped bike, but Scotland’s winter will also help me acclimatize in the cold conditions I’m likely to face in Alaska later in the year.”

How to sponsor The Arctic Rider

The Arctic Rider is taking on this challenge so he can raise money for his two chosen charities; Tiny Lives and Cerebra.

Although the challenge isn’t until June 2018, Gordon is already feeling nerves but it’s nothing a few Ray Mears books won’t sort out: “Two elements are currently testing my nerves for the trips. One is the off-road riding element. Even though I’ll have done some training in the UK, I’ve not ridden off-road since I was a teenager and I’m going to be covering of 1,000 miles with a fully loaded bike off-road with no support.

“Secondly is the wildlife, I’m going to be camping the whole time in Alaska and a lot of wild camping when I get onto the Dalton. Alaska has all 3 species of bears; black bears, polar bears, and brown bears (including grizzly). This is a whole new challenge for me so I have a lot of Ray Mears books to read to be prepared.”

The Arctic Rider’s motorbike raffle is now open; there’s a wide range of prizes up for grabs including Shark Spartan Helmet, RST Tour Master II Jacket and much more. Tickets cost only £2.50 and all money raised goes to supporting the Alaska ride and Tiny Lives Trust. 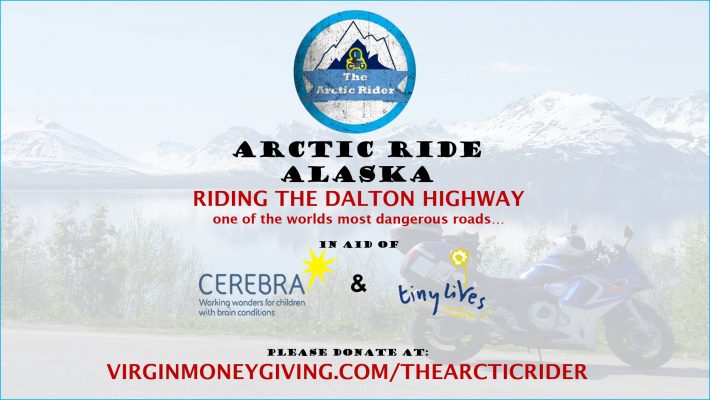