It’s one of the big mysteries of British biking – why are super scooters not more popular? Across continental Europe, big-bore scooters like the Suzuki Burgman 650 and Yamaha T-Max are common: they make great long-distance commuters, are fast and fun to ride on a weekend, and are super practical.

But they are much rarer in the UK, where most bike riders seem to class all scooters as dull, slow beasts, little better than taking the bus. And that’s a real shame.

The Burgman 650 is a luxury, large-capacity super-scoot, with a strong, reliable 638cc parallel twin engine, putting out 54bhp. It has an automatic gearbox with manual override and sports mode, and can touch 120mph where permitted.

The chassis is well up to the power, and handling is very good for a small-wheeled machine. The brakes feature a good ABS system, suspension has preloads adjustment on the rear, and there’s better ground clearance than on many smaller scooters.

It’s the bodywork and equipment that clinches the usability deal though. The Burgman 650 is bigger than the Yamaha T-Max, and has both better weather protection and more storage space under the seat. The top-spec Executive version has an electric windscreen and powered folding mirrors (which makes traffic-splitting easier), plus heated grips and even a heated seat. The pillion accommodation is also expansive, especially with the optional top box back rest.

The 650 Burgman is a little on the large side for really hardcore city traffic-jam duties, but the good steering lock helps get through many gaps. Add hard luggage to the underseat space and you have the luggage capacity of a small sports car. As a middleweight luxury tourer or extended commuter, it makes a lot of sense.

Check out the Suzuki Burgman 650 in action… 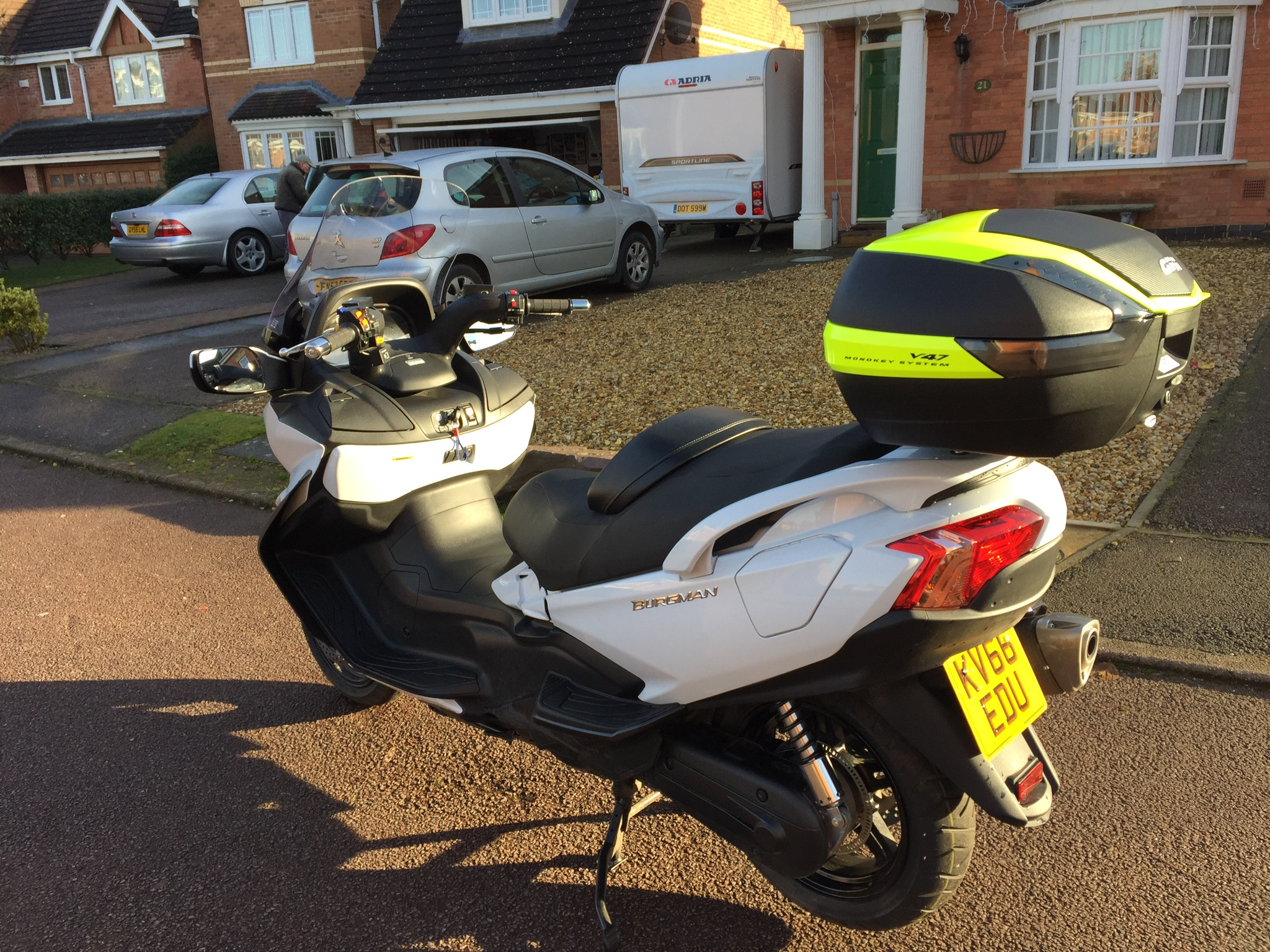 Best thing about the bike is its looks , its comfort and smooth riding

This is a smooth running bike, Both seats give a soft comfy ride , Made for long Journeys, So easy to ride

This bike is built to well for diy mechanics most of the work requires all plastics to be removed The bike has never broken down, The problem i have had with this bike is with the CVT braking this is a very expensive part to replace

This bike rides so well its l feels like you are flying It is so smooth to ride , Because of the low centre of gravity this bike is well adapted to take corners , This bike is so easy to push once the engine warms up the cold oil

Bike has a 650 cc engine this has enough power to hold its own in a racing start , High performance.

Until I succumbed to Arthritus/advancing age I wouldn’t consider a Burgman,it’s not a Bike or a scooter.But I love the practicality of the underseat storage combined with a top box,pull up anywhere and store all the riding gear,shopping is a doddle too so are weekends away even with camping gear.I love it even though it has it’s faults,challenge anyone not to have a smile on their face riding one,you can always use a dark visor so nobody recognises you lol. Get your head round riding a “scooter” and you’ll love it,it has it’s bad point but they’re outweighed by how practical it is.

Engine performs well round town and on motorways reaching 70mph easily especially when power button pressed but a pathetic 3,500 miles between services is poor in my opinion

Lowest 44mpg round town/fast A roads and surprised me with 68mpg two up motorway trip riding gently with my wife pillion. I average 59mpg riding round town and A roads most of the time

Usual Suzuki build quality i.e. not as good as Honda, I replaced most accessible bolts with stainless, pins holding front brake pads needed drilling out as seized, the discs needed replacing on warranty.