I always smile when riders reminisce over what they used to do in the ‘good old days’ and that we are now governed by too many regulations, too many speed restrictions and what about that health and safety stuff. Is that the case or is it what was perceived before as being acceptable is no longer the case?

In the last 40 years the law on helmets, visors and goggles has seen little change. If you currently ride in shorts T shirt and trainers you still don’t break the law, however most the motorcycling fraternity will treat you as a leper, as mind sets have changed.

Our road network is a different place to ride now to back then and the risk is much greater even though the consequence would have remained the same in that ‘tarmac always wins over skin’.  Having said that, in the following example of the ‘good old days’ I would have really welcomed a higher level of safety intervention if it had been on offer…

In the early eighties I was a detective working on a dedicated police surveillance unit. Whilst we had various vehicles at our disposal, we didn’t have a motorcycle and as I already held a full licence I was encouraged to become a surveillance motorcyclist. This required me to complete the usual police advanced motorcycle courses often travelling at speed with nothing more than waterproofs, no armour or padding and to be honest not that warm and waterproof either. Having successfully qualified, the next stage was all new to my constabulary, namely to procure a surveillance bike.

The best bike for the job?

Whilst the Metropolitan Police were well adverse in using two wheelers for the obvious reason of congestion, most provincial forces were starting from scratch. The bike they chose for me was a Honda CB 750, which at the time was a top bike with good reviews, but anything than ideal for the use it was going to be put to. At the time a covert radio system didn’t exist, so the technicians kitted the bike with a full system, which had been removed from the boot of a car. They managed to squash the system into the two panniers and top box, which was fully hidden other than a 3 feet aerial mast, which was anything but covert. 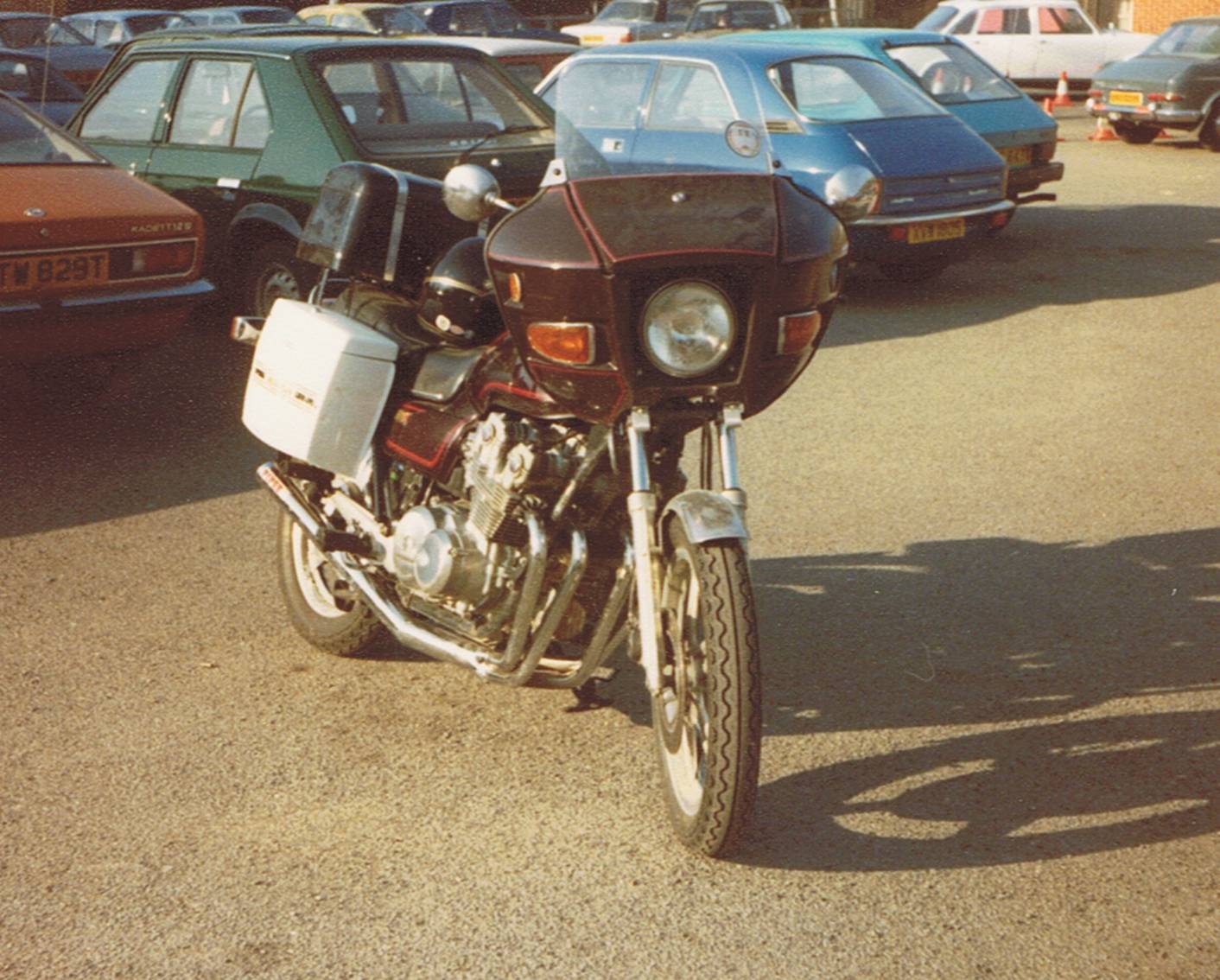 Over the months and in order to try and make the bike more covert, the top box was modified to have an electric aerial, which was raised if there was a need to transmit. A motorised sliding top box looked like something from thunderbirds where the swimming pool moves to one side. Sadly this didn’t work, so other prototypes were tried including me having an aerial system hidden up the back of my coat. This technically did work although my safety wasn’t paramount as I was now wired to the bike and in the event of an accident would remain attached.
There was also the obvious small concern of being a moving conductor for any ‘lightning’ in the area.

Not such a great idea:

Thinking they were onto a solution of hiding wires about the body, they also introduced a glove, which was hard wired to the bike and had magnets and cables in the fingers and allowed a circuit to be created and transmit a message by touching anything metal. Thankfully this was short lived which also might have been the case for me if we used this.  Eventually, a more covert solution was found, but there was another issue regarding the excess weight distribution created by the radios.

Not quite fit for purpose:

The panniers were not designed to carry such weight and their position on the bike meant the weight distribution was excessively beyond the rear wheel spindle. This would account for why the bike went into a ‘death weave’ at speed, and would wheelie just pushing it out of the garage.

Whilst the bike alone was a great bit of kit, it was never designed to carry that level of weight and therefore wasn’t really fit for purpose for the job it was now being asked to perform. More recently the use of Honda Pan Europeans became very topical about a perceived weave at speed caused by excess weight, which resulted in all UK police forces taking their entire fleet off the road. Back then, it was to get back out on the bike as operational necessity was everything.

Not wishing to admit defeat, they moved the top box forward and built new brackets, which allowed the panniers to be fastened in front of the rear wheel spindle, sitting on the rear footrests, which made it slightly better, but not very covert in appearance. It also meant the previous ‘death weave’ was reduced to a mere ‘tank slapper’.

This bike continued in action for 2 years and I have very fond memories of this period, although many times I kissed the ground that I had survived another day in the saddle. Back then there was no ‘health and safety’ or ‘risk assessment’ of activities in the workplace, but if there was, I would have gratefully accepted their intervention.

Mick Jones is the Chief Instructor for Total Advanced Training, a Bike Safe Assessor and a Rospa Motorcycle Examiner. He was a former Bike magazines resident expert for 4 years on their column ‘the riding clinic’ and ex Police Surveillance Motorcyclist in London.

One comment on “The ‘Good Old Days’ as a Surveillance Motorcyclist”

Thank you for that story of your past experience Mick. I like old biker stories and yours was a very interesting read. Not only of your learning experience but of the bike weaving due to excess weight and the experimentation of fitting a radio, made me smile thinking of you using morse code to contact the HQ.

"Quick and easy, with a very good price"