Riding in the British Superbike championships takes hard work, determination and a lot of skill. Before the racing season kicked off, Jordan and Team HARIBO Starmix flew out to Spain for testing. Check out Jordan’s video diary and blog below….

“We landed in Spain for a few days of serious testing as a kick start to the British Superbike championships.  We decided to go to Spain again because the weather is always pretty good. Cartagena is a circuit that is similar to some of the British circuits that we race at during the BSB year.  It was of great help for me and the team. Whilst we were testing we were able to take part in a Pro-Test run by Barry Symmons.  Barry’s retired now, but he used to manage the Honda Superbike race team.  He’s been running these tests for many years, it’s always well organised and properly marshalled and most importantly, having good medical staff as I found out last year with my torn finger. The test was run over four days where we got 40 minutes riding in the morning and an hour in the afternoon (in total). 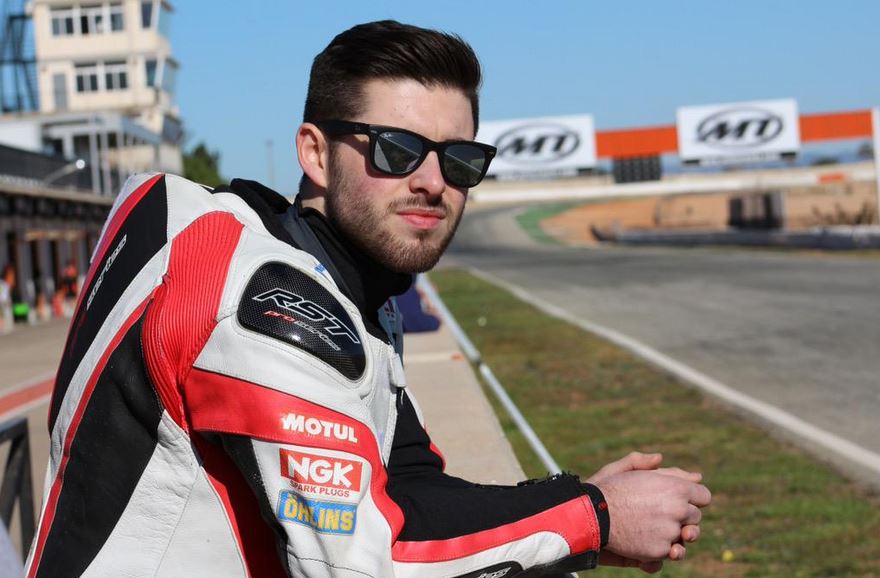 The first day testing was a reminder of how I really needed to shake off the cobwebs; I was not comfortable on the bike as I hadn’t ridden since October. It was used to make some minor changes to the bike, then try and go as quick as possible with what I had.

The second day I managed some decent times, and had gone as quick as possible with the settings I had in the bike, and I was at a bit of dead end. But we had a few ideas sparked up and we managed to change the whole front end of the bike completely. We changed the springs in the front forks to slightly stiffer ones. When you do a change like this, it takes a bit of getting use to, as it turns and stops differently. It helped me progress a lot. I managed to knock on average about 2 seconds a lap off my best time in a couple of sessions.

The third day was the real tester. We were getting to the point where we were really pushing the bike. Lots of slides and skids, all good fun! I managed really good time, and I knew it was good in comparison to what we had heard was a good competitive time.

The fourth day was pretty much where we wanted to be, with a few practise starts from the starting grid, we achieved most of what we could have achieved. I wanted to go quicker, and the settings I had were allowing me to go quickly and go quick in control and put in consistent laps instead of just one quick lap.

The test was fantastic and definitely worth the trip, I’ve gained a lot of knowledge and it’s set me up well ahead of the season starting.  It was of great benefit to not only me but everyone as it is always such great fun with the team!

Testing is always a help and gets you in the flow of things, but circuit conditions are a huge factor. Even the tarmac is different over there. The tyre we had used at Cartagena did only 80 odd miles on a test session, it looked as if it had done the 100’s of miles.  We have started the season, with a DNF (Did Not Finish!) at Donington Park and then a 19th at Brands Hatch. I’m hoping for good things at Oulton Park this weekend coming, testing was good last week, and I was happy with the time I set.